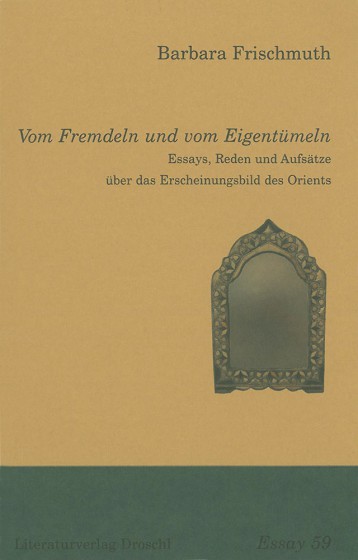 Essays and speeches on the image of the Orient.

Hardly an author of ours is as competent as Barbara Frischmuth when it comes to investigating the complex relations between Orient and Occident, between Middle East and West. The Book of 1001 Nights constituted her initiation into the book world, as she says, and ever since, the fascination with the cultural riches of the Islam has pervaded her own work in many ways.

Throughout the last years the Orient, Turkey and the Islam have been present not so much in culture as in politics. The fear of foreignness has been showing in previously inconceivable forms; dissociation and identity politics (but also ignorance) determine the political discourse on migration and the European Union.

This volume presents a selection of essays, speeches and other pieces on ›oriental issues‹. It is about the Muslim headscarf, the European element of Europe, about the EU and Turkey, and Muslim women, but most of all it is about the cultural riches the literature of the Orient would shower us with (if we just appreciated it) and about Islamic and Christian mystics or ingenious translators like Friedrich Rückert. Frischmuth’s essays exemplify the fecundity of independent thinking – with wit, scepticism and cleverness she puts straight prejudices and set opinions of those German (or Austrian) contemporaries who like to think of themselves as definitely unbiased and open-minded.