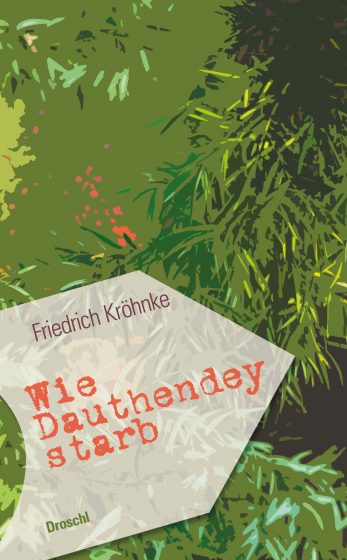 If a writer were to give a poetics lecture as the main character – a certain Kröck – does, he would be done for. Kröck, past his prime, an outcast in the literary world, moves into a little university town. How Dauthendey died is a rapidly told collection of excerpts from this poetry lecture that quickly grows into an intricate jungle of thoughts.

In his lectures, Kröck focuses on the tragic death of writer Max Dauthendey on the island of Java in 1918, and on his own role as Dauthendey’s literary heir and exoticist. Plunging into Dauthendey’s last years during WWI, he draws a sensitive portrait of this unjustly forgotten writer, tracing his journeys, his colourful verse, his illness and suffering in the distance and the longing for his beloved wife Annie.

But where is Kröck’s place in all that? The longer he talks, the more he loses control over his lecture and his script. Losing sight of his true topics, reaching for support, he trails off, unexpectedly and painfully exposing himself.

Friedrich Kröhnke imposes an in many ways shocking poetry lecture on his protagonist – a radical, unusual and at times more than comical tour de force in the footsteps of Dauthendey!

Friedrich Kröhnke »created in the past 25 years his very own idiom … a sense for linguistic intensity and narrative dramaturgy, which is very rare these days.« (Tobias Lehmkuhl, Deutschlandradio)