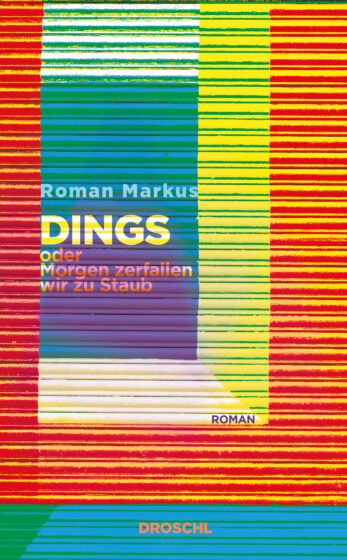 With Thingy, or Tomorrow we turn to dust, the young Viennese writer Roman Markus has written a real summer novel, lively and fun.

»This summer shall never end« the narrator, named … Thingy tells himself. Okay, the start into the hot season may not have been overwhelming – both his job at Teletext and his girlfriend Doreen are gone all of a sudden. But JC, not his »best, but closest« friend, and Jo, who knows how to live well and wildly, take him back to life again.

A short trip from Vienna to Berlin, a summer job as movie projectionist at a local cinema, love and living in the moment – all this puts a sudden stop to Thingy’s every day monotony. He eventually enters the Now but not without the occasional stupidities, such as a devastating sausage stand trip through the neighbourhood or several boozy nights.

Like in a big city road movie, Thingy stumbles from one situation into the next while re-discovering his curiosity and joy of life. Fantastically funny and with rich imagery, Roman Markus portrays this twen having the summer of his life.

»The story of a man in his mid-twenties in a wonderfully funny and pictorial way. A real summer book! (BR)