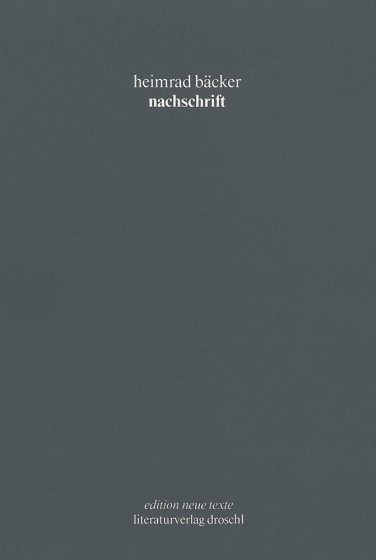 Transcript is an experimental Austrian writer’s literary confrontation with the Holocaust.

The first of Heimrad Bäcker’s books to appear in English, transcript is a disturbing document. Using the techniques of concrete and visual poetry, Heimrad Bäcker presents quotations from the Holocaust’s planners, perpetrators, and victims. The book offers a startling collection of documents that confront us with details from the bureaucratic world of the Nazis and the intimate worlds they destroyed.

Bäcker’s sources range from victims’ letters and medical charts to train schedules and the telephone records of Auschwitz. His transcriptions and reworkings of these sources serve as a reminder that everything about the Shoah was spoken about in great detail, from the most banal to the most monstrous. transcript shows us that the Holocaust was not »unspeakable«, but was an eminently describable and described act spoken about by thousands of people concerned with the precision and even the beauty of their language.

»Even someone who has a solid knowledge of the literature of Nazi Germany may encounter things here they didn’t know about or simply overlooked.« (Charles Simic, New York Book Review)

»With transcript, a new chapter began for concrete and visual poetry.« (Eugen Gomringer)

»I consider transcript to be a major work of concrete poetry and, beyond that, proof that its methods can convey reality much more intensively than the methods of description.« (Friedrich Achleitner)