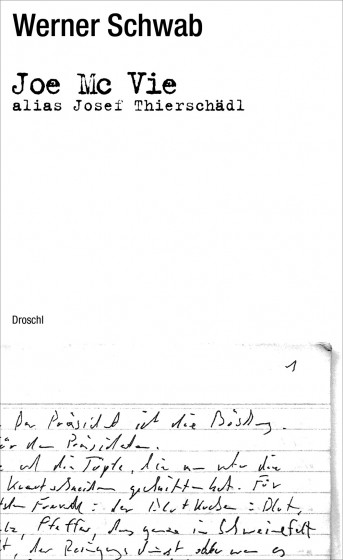 Besides Schwabs numerous plays, this is his first published novel.

Werner Schwab who in his lifetime was almost exclusively seen as a dramatist defined himself as a prose writer mainly. In interviews, he, time and again, pointed out that »thousands of pages of prose« were stored in drawers. In Volume One of his Complete Works one of these texts has been published for the first time now – i. e. Schwab’s novel Joe Mc Vie alias Josef Thierschädl written by him during a stay in Denmark and immediately before he started working on his success Die Präsidentinnen.

Joe Mc Vie, in many respects, occupies a central position within the works of Werner Schwab. In it he laid the foundation for the Schwabian – his soon well renowned idiom, composed of witty jokes, parodies and many alienated parlances – and in it one source of Schwab’s social criticism can be found, too: Joe Mc Vie takes place at a time when Kurt Waldheim ran for President of Austria and at the time of the 50th anniversary of Austria’s ›Anschluss‹ (union) with the German Reich, thus reflecting the political and social discourses of the time.